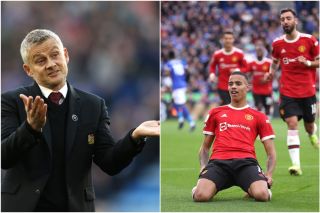 Manchester United are back in action this weekend as they prepare to face Manchester City in the final game before the last international break of the calendar year.

Ole Gunnar Solskjaer is under increasing pressure at the club amid a poor run of results but a somewhat successful recovery attempt has been made in the last week, having embarked on a four-game winless run in the Premier League prior to last weekend’s win at Tottenham.

The Norwegian moss made a host of changes for the visit to Tottenham, with a change of system the most notable difference from the 5-0 thumping against Liverpool. Solskjaer opted to use a three-at-the-back formation for the first time this season, with Raphael Varane’s injury return key to the change.

A double injury blow this week could, however, force Solskjaer’s hand into reverting back to his preferred 4-2-3-1 against Manchester City this weekend, with Varane sustaining a fresh injury against Atalanta earlier this week.

Victor Lindelof missed the clash in Bergamo on Tuesday and it is yet unclear whether the Sweden international will be ready to face Pep Guardiola’s side on Saturday. Eric Bailly was one of the standout performers against Atalanta and the Ivorian would be unlucky to lose his place ahead of the derby.

Further up the pitch, Paul Pogba will serve his second game of a three-match suspension, with Fred likely to return to the side after sitting out the 2-2 draw in Italy.

Mason Greenwood made a positive impact on the game against Atalanta – the 20-year-old was involved in both goals and has started all of his side’s Premier League games bar the win at Tottenham. Bruno Fernandes and Cristiano Ronaldo are nailed on to start whilst Marcus Rashford is expected to fill the final spot.