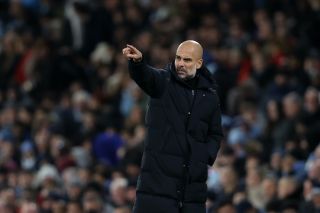 Man City pulled off a dominant win over Club Brugge on Wednesday night ahead of this weekend’s Manchester derby, when Pep Guardiola will be preparing his side to take on “one of the greatest players in history” in Cristiano Ronaldo.

The other Group A game last night between Paris Saint-Germain and RB Leipzig ended 2-2, which was another brilliant result for City, who won 4-1 on the night, to move top of the table on nine points with two games remaining before the knockout phase of the Champions League.

Ultimately, it was a nice warm up for the Manchester derby – compared to United’s hard-fought 2-2 draw away to Atalanta. Guardiola’s side were thankful of goals from Phil Foden, Riyad Mahrez, Raheem Sterling and Gabriel Jesus.

But their attention will quickly turn to Saturday’s trip to Old Trafford in the Premier League.

The reigning champions will be favourites and Ole Gunnaer Solskjaer cannot afford another cricket scoreline at the hands of our rivals, unless we shock the world and give City a good hammering.

Speaking ahead of the match, Guardiola has warned his players about the challenges they face in the upcoming battle against United. He spoke immediately after the 4-1 win over Brugge.

“I didn’t see the United match [against Atalanta], I’m going to analyse and to see what they are so I know how good they are,” said Guardiola, as per ESPN. “We saw it last season. They have one of the best players in history, a guy who can be a scoring machine.”

Guardiola said during the build-up for their match against Brugge that it was “more important” than the meeting against arch-rivals.

When quizzed on that, the former Barcelona and Bayern Munich manager added: “People [were upset] for the fact I said today is more important than United and it was. Now, the most important game ever is United.”

The next match is the biggest for every manager… but for few as much as Solskjaer.

He needs a result this weekend to put United’s domestic campaign back on track. In Europe, everything is fine and United are on course to reach the next round.

But keeping City out will be extremely difficult on Saturday – an early kick off meaning our weekend might be doomed before it truly begins.

Anyhow, keep the faith and listen to the latest episode of the Strettycast — previewing the derby.

Let us know your predictions below in the comment section.