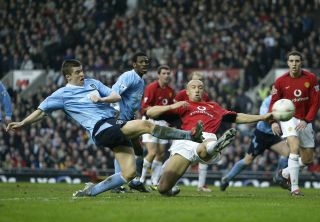 Mikel Silvestre played in eight Manchester derbies during his time at Old Trafford.

In a recent interview with FourFourTwo magazine, the former French defender spoke about the Man City strikers he hated coming up against.

“Darius Vassell was the toughest,” Silvestre said. “He was pretty fast and strong. Craig Bellamy was also a very tough opponent. At that time, teams used tomplay with two strikers – two no.9s – so it was always hard to defend against two quick strikers who make you turn and run towards your own goal. It wasn’t easy playing against players like Vassell and Bellamy.”

During Silvestre’s time at United, the Reds fought for league titles with Arsenal and Chelsea, while City were not seen as a threat to anyone (but themselves!).

Football is much different these days – and it wouldn’t be difficult to name City’s best centre-forward at the moment, since they’ve only got Gabriel Jesus following the summer departure of Sergio Aguero, who has received a huge blow and will miss three months of action for Barcelona.

“We had four derbies a season when City were actually in the Premier League. Two against City and two against Liverpool,” Silvestre added. “Sir Alex used to just say, ‘Boys, this weekend it’s City.’ That’s all he had to say because we knew what that meant.

“Our approach to those games was pretty much the same as other games except that the intensity, the urgency; every challenge is going to be harder. We demanded more of each other during training that week. The manager’s voice would be different; more intense. You could tell how important these games were to people across Manchester. Even if City weren’t in the same bracket as us back then, they were still massive, massive games.”

Manchester United will be without Raphael Varane this weekend and we are still waiting on an update on Victor Lindelof’s knock which kept him out of the clash against Atalanta on Tuesday night.

While Man City may not have a world class centre-forward, but Pep Guardiola will have a number of attacking players from the start who are able to put chances on a plate for their teammates.

Time will tell if they are going to be prolific enough to put them away, like Liverpool did at Old Trafford two weeks ago, winning 5-0 to put even more pressure on Ole Gunnar Solskjaer.

One thing is certain and it’s that we could probably do with Silvestre at the back for Saturday’s derby.