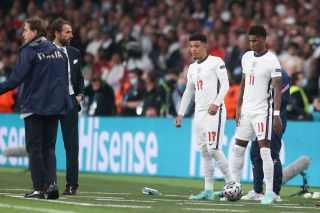 Gareth Southgate has named his 25-man squad for England’s upcoming World Cup qualifiers against Albania and San Marino. Manchester United star Marcus Rashford is back among the selection, but there is no place in the squad for Jadon Sancho or Jesse Lingard.

This is definitely a cause of concern for Sancho, who has had an underwhelming start to life as a Manchester United player, but it doesn’t help that results aren’t going the team’s way and Ole Gunnar Solskjaer has tweaked his system to make United more compact at the back.

It will be always be difficult for Sancho to break into United if the manager’s solution to bad results is to play a 5-3-2 formation. If that was his plan in the summer, I don’t think he would have paid £73 million on a winger.

Lingard also finds himself in a bit of a situation knowing that if he was playing every week, there is no doubt that he would be in the England squad. At United he won’t get that game time, so maybe it’s time to make a decision for the better of his career?

Sancho and Lingard are well within their right to ask how Harry Maguire has got called up. He may be one of England’s most senior professionals but that doesn’t change the fact he looks to be playing through an injury and is currently in terrible form.

Luke Shaw is another who has been poor this season.

See the full England squad below:

Confirming your #ThreeLions squad for November! 👊

🗣"Gareth Southgate had sat down with Mason Greenwood in September and Mason had said at this stage of my career I want to establish myself as a Manchester United player."

We were always under the impression Lingard wanted to come back to Old Trafford after his loan spell at West Ham and that hasn’t changed.

The only real positive comes for Rashford, who I hope doesn’t pick up another injury on international duty, because we’ve already missed him for a chunk of the season and he’s only getting back to his best.

To be blunt, I don’t want every United player going away on international duty because our players have a terrible record picking up injuries while they’re away. We need to get our season on track and injuries will only hinder our chances further.

Both Lingard and Sancho should use this as a chance to put the extra yard in at Carrington during the break. As a plea to the under pressure manager because it’s their careers on the line after all.

Club > country – no matter what!