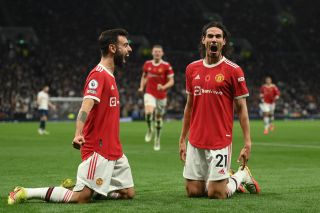 Edinson Cavani has turned into a fan-favourite at Manchester United, with his delirious goalscoring form at the end of the 2020/21 campaign more or less keeping his side’s season alive.

Cavani joined the club on deadline day in 2020 and amid a difficult start to life at Manchester United, he eventually found his feet and scored several goals – he found the net a total of 17 times in his debut season.

Cavani’s first four months at the club were challenging, however. A lack of fitness derailed his start to the season and when he finally got going, he served a three-match suspension for an inappropriate social media post. Now, it has been revealed that his lack of playing time last year resulted in the Uruguayan forward trying to engineer a move away from the club.

That’s according to Boca Juniors chief Juan Roman Riquelme, who claims that Cavani picked up the phone to secure a move to the Argentinian outfit last January.

“In January, Cavani called me saying that he wanted to come because he was playing little there,” he told TNT Sports, via The Mirror.

“I’ve been speaking with him for a long time and he called me in January to come because he wasn’t playing there. I remember we talked one day and the next day he came in and scored two goals in the last minutes.

“He made a comeback. From then on he started scoring goals in all the games and they renewed with him.”

SN’s verdict on Cavani’s apparent u-turn…
It would’ve been easy for Cavani to end his Old Trafford adventure when times were tough last year but his resilience is a testament to his character – something which eventually earned him a one-year extension to the 12-month arrangement he signed in 2020.

Cavani almost singlehandedly guided United through their run-in last season and although Cristiano Ronaldo has taken on the mantle this season, Cavani will remain an integral part of the team. A move back to South America is, however, still expected to go through in the future when his European adventure comes to an end.