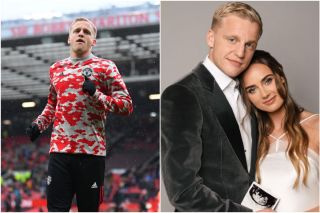 Van de Beek has endured a difficult 15 months since joining Manchester United from Ajax in 2020, with his Premier League starts restricted to just four since the transfer.

He is now set for happier times off the pitch, however, as he took to Instagram to announce that he and his partner are set to welcome a child into the world, as seen below.

Several Manchester United team-mates were quick to congratulate the Dutch midfielder in the comments, with Juan Mata, Anthony Martial, and Jesse Lingard all leaving their blessings on Van de Beek’s page.

The 24-year-old is liked by large sections of the Manchester United support, despite rarely featuring. The dream case scenario for the midfielder is a happy ending at Old Trafford but as things stand, that looks unlikely.

A move to Everton was rumoured over the summer and with appearances still limited, an exit could be on the cards in January.