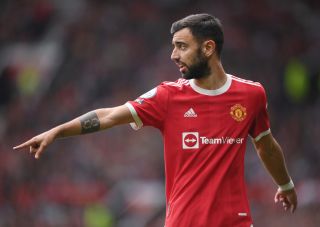 Manchester United midfielder Bruno Fernandes remains the heartbeat of Ole Gunnar Solskjaer’s side, despite the heavy investments in the squad over the last 18 months.

Since Fernandes signed for the club in January 2020, he has been directly involved in 77 goals (44 goals, 33 assists), more than any other Premier League player in all competitions over the same period.

To say that at times, Manchester United have been over-reliant on Fernandes’ creativity, would be an understatement. The 27-year-old is the main creator of this United side and without him, they look lost.

His importance to the side has been highlighted further in recent weeks. This season, he has scored four goals and assisted a further eight, with seven of those assists coming in his last seven appearances in all competitions.

Most chances created in the Premier League this season:

Most chances created in the #UCL this season:

Fernandes is a man in top form at the moment and he currently finds himself at the top of the creativity charts at both domestic and European level, as seen above.

The former Sporting captain might not be as free-scoring as he was last season due to his deeper role in the side but clearly, he remains one of Europe’s most potent creators and the figures are backing those claims up.

SN’s verdict on United’s reliance on Fernandes…
The 27-year-old is United’s engine in the middle of the park and losing him would be a devastating blow for Ole Gunnar Solskjaer, who is already under surmounting pressure at the club.

Thankfully for the Norwegian manager, Fernandes has only missed one game in his career due to illness or injury – back in 2017 when he missed one game for Sampdoria due to the flu, according to Transfermarkt.

Should the Reds be without Fernandes for whatever reason, there is not one clear replacement for him in the current squad. Paul Pogba and Donny van de Beek both enjoy an attacking midfield role but neither player can replicate Fernandes’ brilliance. Jesse Lingard is also an option but the 28-year-old is preferred on the wing by Solskjaer.

Manchester United will need to tie Fernandes down to a long-term contract sooner rather than later, despite less than two years passing since he signed from Sporting. Europe’s biggest clubs are bound to circle around the Portugal international if United fail to challenge for the biggest honours in the near future.