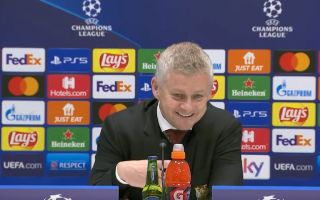 Ole Gunnar Solskjaer says he feels the support for the team whether he travels home or away with Manchester United after Tuesday night’s 2-2 draw with Atalanta in the Champions League.

When you look at the Stretford End on match day, it can be the complete opposite to social media. There’s nobody posing anonymous seeking clicks. Nobody calling for the manager to be sacked. They are fans getting behind their team through thick and thin.

The same could be said on Saturday when United’s faithful travelled to London to see the lads beat Tottenham 3-0.

Admittedly, the fans down there turned on Nuno Espirito Santo and he has since been replaced by Antonio Conte.

But Manchester United is different.

Ole humbled by the support he receives from the fans. 👏🏼

From being in the Stretford End against Liverpool, I left the ground after staying until the end and sung/clapped constantly for the final 15 minutes as my team got tore asunder by our arch-rivals. The sort of football that would turn your stomach.

Everyone in TRA felt the same. A responsibility to get behind the team, even while they were being hammered 5-0 against Liverpool.

We all adore Solskjaer and (dare I say still) wanted it to work.

Whatever happens off the pitch is out of our hands because the Glazers have never listened to the fans.