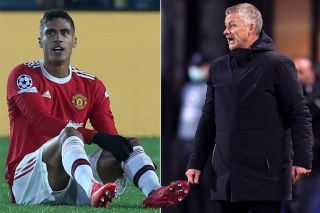 When Raphael Varane went down injured against Atalanta, every Red in the world feared the worst that the Frenchman was rushed back from his previous injury and could now be out for this weekend’s crucial Manchester derby.

Derbies don’t get much bigger than this for Ole Gunnar Solskjaer because his job could be on the brink and potentially being without Varane at centre-back is a massive blow.

Perhaps if it wasn’t the case and Victor Lindelof was also fit there would be room for conversation about Harry Maguire’s place in the team because the skipper has been abysmal this season.

Ole Gunnar Solskjaer has revealed the France international felt a problem with his hamstring during United’s 2-2 draw in the Champions League on Tuesday.

The manager couldn’t afford to take any chances with his key defender’s fitness.

Ole said: "He felt his hamstring, we'll have to look at him tomorrow."

“He felt his hamstring, as he ran, tighten up so he didn’t want to risk anything,” Solskjaer said. “The first assessment doesn’t look good, but we’ll assess him again tomorrow and fingers crossed.”

Varane had to be substituted in the 38th minute, with Mason Greenwood coming on to give United a needed boost in attack. I also felt a midfielder could have made a difference at the time, in the shape of Donny van de Beek as United were struggling to keep the ball and build anything from midfield.

It adds worry to my thoughts about Saturday.

If Man City show up, which is a big if this season, and manage to put away their chances it could end up being another cricket scoreline at Old Trafford. And not the sort we want to see again.

Harry Maguire is a complete liability at the back and Victor Lindelof missed last night’s game after sustaining a knock in training. Then there’s Eric Bailly, capable of great things and the opposite.

The Ivorian’s inconsistency sums up this United side perfectly.