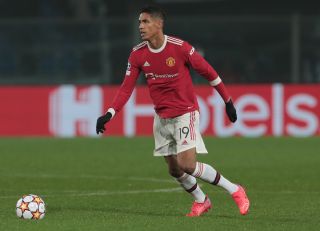 Manchester United defender Raphael Varane is set for yet another spell on the sidelines this season, having missed three of his side’s last five games due to a groin injury sustained with France.

The 28-year-old returned to the side last weekend and put in a flawless display against Tottenham but Ole Gunnar Solskjaer will have to do without his star defender for the foreseeable future.

That’s according to French publication L’Equipe, via Sport Witness, who have put a 3-4 week timeline on Varane’s recovery from a hamstring injury he sustained in Tuesday night’s 2-2 draw with Atalanta.

Although the news will come as a huge blow to Ole Gunnar Solskjaer, he could find comfort in that the international break is just around the corner and a large chunk of his recovery will be spent during the two-week-long break.

SN’s verdict on Raphael Varane’s injury and United’s options…
Solskjaer opted to use a three-at-the-back formation against Tottenham last week and it worked to perfection, with Varane at the heart of it and Victor Lindelof and Harry Maguire on either side.

Lindelof’s injury, which is not believed to be serious, meant that Eric Bailly was drafted into the makeshift defence for last night’s visit to Bergamo. The Ivorian was one of United’s best performers but there are questions over whether he can maintain decent form for an extended period. Furthermore, Bailly’s fitness has long been an issue of concern for Solskjaer.

The news of Varane’s injury will be gutting ahead of Saturday’s Manchester derby and should Lindelof not be available, that almost certainly rules out the possibility of Solskjaer playing with three central defenders.

Luke Shaw has played as the left-sided centre-back on a handful of occasions but Solskjaer prefers to deploy Maguire there.