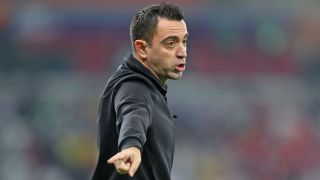 Barcelona legend Xavi is a potential candidate to take over from Ronald Koeman at Camp Nou, and speculation suggests he would be interested in signing Manchester United midfielder Paul Pogba.

Koeman was sacked last week and Barcelona are said to be upping their efforts to appoint Xavi as their new manager.

Xavi has spent the last two years managing Doha-based outfit Al-Sadd but would be crazy to turn down the opportunity to manage Barca, even if the job seems like a poisoned chalice.

The France international is coming towards to end of his contract at Old Trafford, with the expiry date just months away, and he will be free to talk to European clubs from January onwards.

According to El Nacional, Pogba is one the top targets for Xavi should he get the Barcelona job, but they will also be aware of long-standing interest from PSG and his former club Juventus.

Is Pogba the answer to Barcelona’s questions? Well, he has never really been the answer to our problems and from the fans I speak to regularly, there is a feeling of patience being lost as he winds down his current deal.

Xavi would be taking a risk if he made Pogba his big summer signing to turn things around at Barcelona next season and beyond. It’s just a shame United could lose a valuable asset for zilch… yet again.

While the Spanish game would probably suit Pogba more because he will be given more time on the ball, his time at Manchester United will always be frowned upon for not achieving the great things he set out to do when he returned from Juventus in 2016.

It feels inevitable that he will leave for free at the end of the season – a plot by the player himself and his odious agent Mino Raiola.