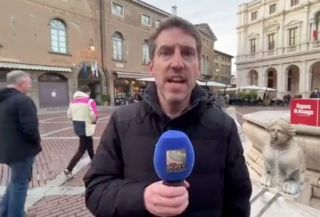 Andy Mitten is one of many Reds we are envious of since they’re either working or enjoying the culture in Bergamo, Italy, where Manchester United take on Atalanta.

Manchester United know a win would give them a bigger advantage in Group F, with the aim now to reach the knockout stages by topping our group.

United We Stand editor and respected journalist, Andy Mitten, is working on the game for Sony Sports India.

He has recorded a quick segment from the beautiful city of Bergamo, as seen below:

Mitten is expecting some changes from the team that beat Spurs 3-0 at the weekend, when Ole Gunnar Solskjaer tweaked his formation and went with three centre-backs in a 5-3-2.

“I would expect to see some changes in the United team, from the one that beat Tottenham 3-0 in London on Saturday,” Mitten said.

We’ve predicted something similar tonight and will have the team news for you on the blog at 7pm.

If you have access to the Sony channel in question for tonight’s game, it’s always worth listening to what Mitten has to say on things United.

He features regularly on the Talk of the Devils podcast, by The Athletic, which is hosted by Ian Irving.

We’re wishing Andy and other Reds a safe visit to Bergamo, and safe trip back!

Let us know what changes you are expecting from the line-up tonight?