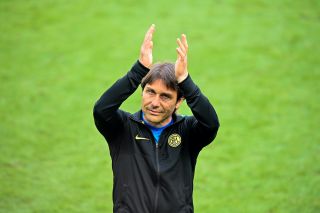 Antonio Conte’s name did the rounds after Manchester United’s 5-0 defeat to Liverpool, and even after the win over Tottenham, I wouldn’t say Ole Gunnar Solskjaer’s position has strengthened all that much.

There’s a lot of work to do, this week alone with important games against Atalanta and Man City, if Solskjaer is to turn things around in order to get United’s season back on track.

It hurt as I was stood in the Stretford End to see us get humiliated by the Scousers, but the board gave the manager three games and he won his first convincingly after tweaking the formation to a 5-3-2.

As per Laurie Withwell at the Athletic, United executives were not completely sold on Conte’s approach to managing the side because he’d be too confrontational.

“Those who know United executives believe he would be judged too confrontational for the corporate structure of acquiescence that permeates the club.”

Tottenham Hotspur’s shiny new stadium has many sliding doors + there was another on Saturday.

Conte wanted #MUFC job + defeat for Solskjaer would have tested resolve of board to stand by him.

Instead Solskjaer is steadied + Conte is heading to #THFC.https://t.co/ST9NrReP7c

From my time watching Conte and his football, mostly with Chelsea between 2016-18, I would say he pushes barriers but has never lost the dressing room. It would incorrect to claim his ways are toxic or similar to Jose Mourinho.

That said, Mourinho nor Louis van Gaal never seemed happy about the commercial side of things at United.

However, Conte’s style of football isn’t really what United are about.

Yes, he’s a tactical genius and we’re probably missing out on one of the most respected coaches around, but United claim to have a plan in place and a structure. Whoever is in charge must fit that.

Conte is someone who would push barriers with the board and demand that his work warrants reward. It wouldn’t surprise us if the Glazers were fearful of that.

The Italian is also on the verge of becoming Tottenham Hotspur manager showing that Daniel Levy had no patience whatsoever with Nuno Espirito Santo, as per Sky Sports.

It feels like Spurs jumped the gun while they could.