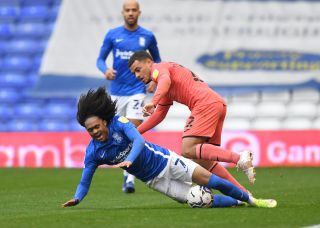 Tahith Chong will return to Manchester United for treatment on a groin injury, according to reports.

Manchester United loanee Tahith Chong missed Birmingham City’s 2-0 win at Middlesbrough in the Championship on Saturday due to an injury sustained in training.

Following the win at the weekend, Birmingham City manager Lee Bowyer explained how the the Dutch winger picked up the knock.

Speaking to Birmingham City’s official website, the manager said: “Chong made a five-yard pass in training and felt some pain in his groin. He has gone for a scan.”

This is a huge blow to everyone’s plan this season, especially when it comes to Chong, as a sustained spell in the treatment room is the last thing he needs.

The youngster went back out on loan in order to gain valuable first team experience but could face 16 weeks out with this injury, as per Birmingham based journalist Rob Jones.

Bad news on the injury front for #BCFC fans – Manchester United loanee Tahith Chong has had a scan and could face up to 16 weeks out after injury sustained in training. Will return to United for treatment.

At least he’s started 13 games the Championship this season and has three assists to his name.

Chong will be gutted to have missed out on more playing time with few games left to prove himself before the upcoming international break.

The injury could see him out for some time, sadly.