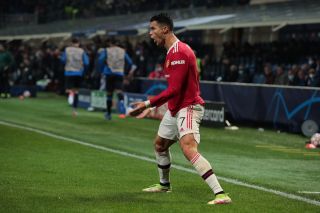 Manchester United have produced yet another dramatic night in the Champions League as they leave Italy with a point following a hard-fought battle with Atalanta.

Gian Piero Gasperini’s side took the lead in the first half but Cristiano Ronaldo’s first-half equaliser made sure the two sides went into the interval level.

Atalanta restored their lead early in the second half after a lengthy VAR check and it looked like La Dea would be stealing all three points. Instead, Ronaldo did what Ronaldo does and equalised in the dying moments with a sublime volley.

The point makes sure United stay at the top of their Champions League group, with the next game against Villarreal now proving to be ever so vital. If results go their way, Ole Gunnar Solskjaer’s side could secure their place in the next round.

David de Gea – 5
The Spaniard has arguably been United’s best player this season so to concede that first goal will be disappointing. Could do very little for the second goal.

Aaron Wan-Bissaka – 6
An improvement from some of his performances earlier in the season but still leaves a lot to be desired in the final third.

Eric Bailly – 9
His only minutes before tonight came in the Carabao Cup against West Ham but the Ivorian’s lack of minutes did not show as he put in his best performance in a long time.

Raphael Varane – N/A
Really unfortunate to sustain yet another injury in his short United career so far as he was substituted in the first half.

Harry Maguire – 5
The United skipper struggled again and it doesn’t quite look like he has recovered from that calf injury.

Luke Shaw – 5
It’s unclear whether his forward runs were down to instructions or if he was simply reluctant to overlap but the 26-year-old offered very little in attack.

Paul Pogba – 3
The Frenchman struggled badly on his return to Italy and will find it hard to get back into the side when his domestic ban ends.

Scott McTominay – 6
Walked on eggshells for large portions of the second half after being booked but stood up well to the challenges and was often United’s only ball winner.

Bruno Fernandes – 6
Seven assists in his last seven games but ultimately failed to have a big impact on the game. Man-marked by Atalanta’s Marten de Roon in the second half.

Marcus Rashford – 4
Not the young winger’s best game but inconsistency is expected after a long layoff.

Cristiano Ronaldo – 10
We are running out of superlatives to describe this man – his two goals against the Italian’s is exactly why Solskjaer was so eager to bring him back to the club.

Substitutes
Mason Greenwood – 7
Had a positive impact on the game as United switched formation. Assisted the winner.

Nemanja Matic – 6
Offered what United needed and their ball retention improved when he was introduced.

Edinson Cavani – 6
Pushed the Atalanta backline down which resulted in added pressure.

Donny van de Beek & Jadon Sancho – N/A
The pair were only on for a few minutes but they ultimately enjoyed decent cameos.