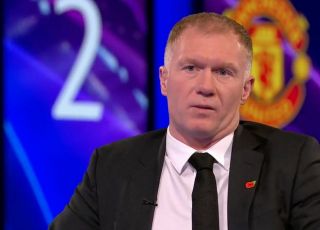 Paul Scholes was quick to blame Harry Maguire for his mistakes against Atalanta in tonight’s 2-2 draw, telling BT Sport he ‘doesn’t look right’.

The former Manchester United issued a warning to the team ahead of Saturday’s Manchester derby, when Man City come to Old Trafford in a game that could either save or cost Ole Gunnar Solskjaer his job.

We don’t want a repeat of the disaster from two weeks ago as Liverpool ran out 5-0 winners on our own turf. That was a bitter pill swallow and results like that are freak.

Well, they should be, and another wouldn’t be accepted at the weekend.

You could tell by Scholes he is worried, though, rightly fearing the worst over Raphael Varane’s injury.

“They played alright on Saturday but tonight it was messy,” Scholes said on BT Sport.

“As soon as Varane went off, it went all over the place, really shaky.

“The quality in the middle of the pitch wasn’t great, giving the ball away. Maguire just doesn’t look right, and I don’t want to say it again, but with no Varane on Saturday it has to be a worry.

“If you’re Pep [Guardiola] you would think you have a good chance to win. City think that anyway, at any point it will be a difficult game.

“But with no Varane it is going to be more difficult – saying that, they have the quality to score.

“Even in the Liverpool game they produced 3 clear chances. United need to defend and concentration is key.”

We shouldn’t forget how Scholes called the humiliation against Liverpool after United’s comeback win against Atalanta three weeks ago, when he said (via The Express): “I get all the United excitement with the way they’re playing. But that first half, I just didn’t enjoy it.

“I think that first half put me off the second half in all honesty. I think if United were playing a better team it would have been out of sight.

“They were playing against Atalanta with five players missing, a defender who had to go off at half-time.

“And great, I get all the excitement, the going for it, all the chances created, but there was something about it that I just didn’t enjoy.

“The first half I thought was worrying, they just looked anything but a team. It just lacked unity.

“It was six players – it was the back four, the two holding midfield players and the rest. That to me is a worrying sign.

“I don’t want to sound like a party pooper, it was a great night for the fans and a great comeback with some really good goals and Cristiano was the big hero again winning us the game.

“But that first half was a major worry for me.”

Sadly, Liverpool proved Scholes right but that is why his view on tonight’s game shouldn’t be overlooked.

United went on to be outplayed virtually the entire 90 minutes – to a point the Scousers appeared to give in after going five goals ahead.

City won’t do that.

When it comes to Maguire, however, I don’t think he has looked right all season.

I was critical of his performances last season but he proved me wrong at the Euros as England reached the final, only to lose against Italy.

When it comes to England, I simply couldn’t care less. It’s United or nothing and Maguire has a lot of improving to do as our captain.