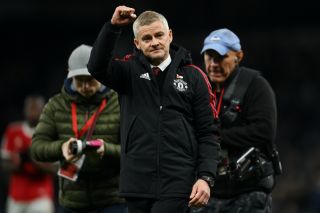 Ole Gunnar Solskjaer has no room for sulkers as Manchester United attempt to turn their season around after a slow start.

The manager has urged his players to channel their frustration in the right way to compete for places, particularly those fighting for a spot in the forward positions, with United looking to reach a turning point of the season.

“When you are at a place like this, you have so many players and we don’t have time for anyone to sulk and not give energy to the team,” he said, as per Independent.ie. “If you are not in starting XI, you are there to support team-mates and when you come on you do your best. And if you don’t even come on, what’s the single most important thing you can do to help the team? And the attitude was spot on [against Spurs].

“No one is happy when they don’t play, but the squad morale is really good and has to be. The team has to come before any individual.

“I can’t fault the attitude and motivation. It also has to come from within.

“Players will go through difficult spells when they are not playing, then their character is revealed and I’m pleased with most of mine.”

As is the case most weeks with United, a high-profile name or two gets left out of the starting line-up, as we seen against Liverpool and Tottenham in recent outings.

Paul Pogba was suspended for the Tottenham clash after his red card against Liverpool and new signing Jadon Sancho was omitted again. Meanwhile, Donny van de Beek has been completely forgotten about.

Solskjaer went with three centre-backs at the back on Sunday as United got an important 3-0 win, but there’s a lot of work left to be done if the Norwegian is to save his job and get our season back on track.

It remains to be seen whether Solskjaer will opt for a 5-3-2 against Atalanta but they will be looking to strengthen their hold on Group F in the Champions League, with the biggest job being avoiding defeat away to the Serie A outfit.

All Marcus Rashford, Mason Greenwood, Anthony Martial missed out on a starting place but time will tell if the manager decides to mix things around for tonight’s tie.

In fact, Owen Hargreaves claimed Rashford was “fuming” about being on the bench against Spurs – but the United star took to Twitter to rubbish these reports.

Fuming at the manager??! We won the game 🤷🏾‍♂️ that celebration was pure relief! It’s been a hard week… https://t.co/qHCg5x268u

Glad Rashford cleared that up because I very much doubt he’s one of the sulkers we’ve got anything to worry about.