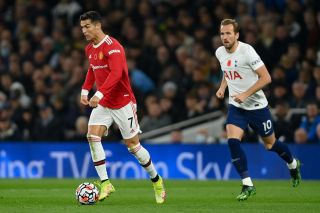 Cristiano Ronaldo has been named Manchester United’s Player of the Month again.

CR7 has now won the award in both of his months back at the club – September and October – and he will be aiming for more before the season concludes.

As well as that, Ronaldo will want to end the campaign with a trophy won by the team, because that is the biggest reason he returned from Juventus at the end of August.

Dreams of winning the Premier League still exist but we look a million miles away, and a run in the Champions League may seem far fetched.

However, the Player of the Month award welcomes votes from the fans on the official Manchester United website and for October, David de Gea (30%) came second with fit-again Marcus Rashford (13%) placed third.

It's back-to-back #MUFC Player of the Month awards for @Cristiano 👏🎖 pic.twitter.com/wAKOIkqhLm

Ronaldo got the majority of the vote (57%) and currently has seven goals in 10 games since returning to United, but all eyes are on tonight’s game against Atalanta in the Champions League.

The Portuguese superstar has a knack for scoring late goals in Champions League games this season and we hope to see more on the same later on.

Even though Ronaldo deserves the award, he came in for some criticism this month for not tracking back as much as other players. Former teammate Rio Ferdinand told Five YouTube channel: “I’ve heard some talk and the only way I can explain it, is it’s blasphemy, when I heard some people talking about Ronaldo’s the reason why Man United aren’t going to be a success. Listen, I’ve been seeing too much of it. Don’t talk like that, please. It’s a disgrace, absolute disgrace.

“A player that’s done what he’s done in the game, a superstar at any generation, he’ll be one of the best players in any generation you can think about. Even again, he just told people at the weekend what he’s about here. The pressure’s on and he scores.”

Let’s hope Ronaldo can get the business done tonight!