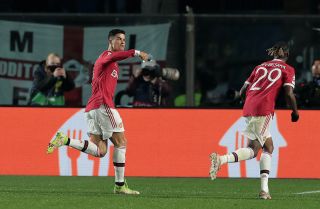 Another day, another opportunity for the world’s media to lavish endless denunciation of the abilities of Ole Gunnar Solskjær. This criticism is now so predictable, that some have turned toward accusations of formation theft. Believe that if you will.

Manchester United travelled to the Stadio di Bergamo knowing that a victory would take them 5 points clear of 3rd place with only two games to play. The Italian side was eager to make amends of the first meeting and the partisan crowd were deafening from the opening whistle.

The Reds started brightly and looked calm and composed in possession. The early pressure nearly paid off and Scott McTominay had a shot deflected onto the post after 5 minutes of play. The home side responded well, began retaining possession and eventually broke the deadlock on the 12th minute.

United struggled to get back into the game after the goal and look fragmented in their play. Sloppy in possession, slow in build-up and a performance that was largely typified by a lacklustre display from Paul Pogba. To add further dismay to an already frustrating evening, United lost Raphaël Varane to injury. The Frenchman dropped to the ground and signalled to the bench for replacement.

There was little to smile about for the majority of the first half, that was until a breathtaking injury-time equaliser silenced the home crowd. Quick, precise and fast direct passing leading to a team goal that should be rightfully highlighted for some time – Cristiano Ronaldo continuing his fine run of goalscoring form.

The goal was scored at the perfect time and absolutely changed the manager’s team talk at halftime. The continuation from the late equaliser saw United race out of the blocks in the second half, only to see a characteristic lapse in defensive structure leading to a second goal from the Italians. It’s this very lapse in concentration that has seen United struggle for clean sheets.

The second half meandered in a familiar feel with the home side sitting deep, absorbing pressure and looking to play on the break. United held much of the ball without ever really threatening. In a continuation from the 1st half, United’s play was scattered with individual errors and frustrating periods of uninspiring passages of play.

Five minutes of added time, United facing a daunting trip to Spain and potential elimination from Europe’s premier competition, Cristiano Ronaldo stole the headlines once more. 5 goals in 4 European appearances this season and the 36-year-old shows no signs of slowing down. The game finishes 2-2. Here are my main talking points from tonights game.

– Ronaldo is inevitable. Recently maligned for his lack of pressing ability in the final third. I have also questioned his overall effect on the team – with question marks about how his inclusion is ultimately forcing a change to the teams attacking structure. Despite this, he is a man the requires a morsel of an opportunity and is as hungry for goals at 36, as he was at 18. Truly remarkable!

– Varane leaving the field. What was largely inevitable during Varane’s stint on the sidelines was just how much we needed his presence. Say what you will about Spurs, he was as assured in the backline as anybody could wish for and reverted to its shaky self after his departure tonight. All attention will be on news of his injury and whether or not he’ll be available for the upcoming Manchester derby.

– Eric Bailly was a standout. In a night filled with individual errors, Bailly was a positive point. He made several important blocks tonight, looked assured in defence and offered some much needed composure in the backline. In what was a rare appearance, Bailly will have given the manager plenty to think about for inclusion against City.

– Pogba was extremely poor. Lethargic in possession, poor in distribution and generally underwhelming, Pogba’s performance left far too much to criticise. For a player who’s categorised as a superstar, his performance was anything but. People may raise an eyebrow at this, but Fred was sorely missed in place of Pogba tonight. His energy was not replicated by the Frenchman and his continued mislaid passes destroyed any momentum for the side.

– Coming from behind once more. On a night where the eyes of the world were placed firmly on this game, United again leave more questions than answers. Solskjær will face certain scrutiny for another underwhelming performance and although we live in a results game, this performance will have done very little to build upon a very good outing in London.

One response to “Biggest talking points from Atalanta 2-2 Manchester United: Ronaldo is inevitable”