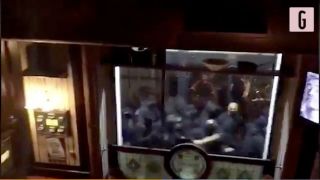 According to reports, a group of Manchester United fans have been attacked by locals ahead of Tuesday night’s Champions League clash in Bergamo.

Reports at the weekend suggested that police were worried about the presence of travelling support, therefore, a ban on the sale of strong alcohol was introduced for 24 hours.

But there’s a degree of irony in how it has been Atalanta fans causing the problems for their own city.

One United fan was injured along with a waitress, according to Italian outlet La Gazetta dello Sport, after a fight broke up in a bar on Monday, as cited by The Mirror.

The newspaper adds that local authorities are investigating the issue.

You can see from the footage, courtesy of La Gazetta dello Sport, that windows inside the bar were smashed and that quite a few ultras were outside.

Shocking behaviour while a few United fans were inside having a sing song.

United fans are owed a healthy reputation across Europe, and this shows how they’ve yet again been targeted while being away supporting their team.

To Brian (Stretty News writer) and other Reds in or en route to Bergamo, have fun and stay safe.