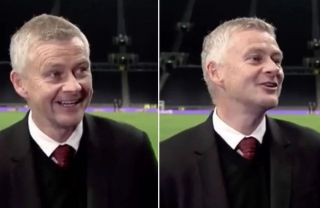 It was an enjoyable evening for Ole Gunnar Solskjaer as his Manchester United side showed early signs of recovery from their humiliating defeat to Liverpool last week to run out 3-0 winners away to Tottenham.

Cristiano Ronaldo was at his best to open the scoring with an incredible volley from a Bruno Fernandes cross before Edsinson Cavani and Marcus Rashford sealed the win after a much more organised performance from the Reds, playing in a different formation than seen in previous matches.

The result brings us closer to the top of the table, but we’re still too distant away from Chelsea for my liking, but another decent result next weekend against Man City and it will seem like our season is back on track.

Granted everything goes to plan against Atalanta in the Champions League on Tuesday night.

An upbeat Solskjaer spoke to MUTV before the match, down in London, where he was abused by Tottenham fans sat in the stands (they didn’t even support their own manager Nuno Espirito Santo). He promptly decided to shut down the individual while showing class.

“Can I do this interview and then you can abuse me after, eh?”, Solskjaer said, with a smile written across his face for the MUTV cameras.

The manager was happy with the performance at full-time but they must carry that momentum with them into upcoming games against Atalanta and Spurs.

Rival fans – including Liverpool, Leeds and Man City – were joined by the Tottenham bunch yesterday, who sung “Ole’s at the wheel” but thankfully it came back to haunt them.

But I have no doubt in my mind the United faithful will be singing it and getting behind the team in Atalanta!