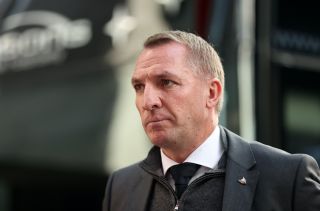 It didn’t come as the biggest surprise when one former Liverpool manager became linked with the Manchester United job, just days after the Scousers humiliated the Red Devils 5-0 at Old Trafford, but the Northern Ireland national has already been dismissed by Steve Nicol.

The former Liverpool and Scotland player doesn’t believe Brendan Rodgers has the “character” (which seems like a catchphrase whenever he’s talking) to manage a club like Manchester United.

“To manage one of the biggest clubs in the world in Manchester United you need to have some sort of strength, some strong characteristic whether other people like you or not,” Nicol told ESPN FC.

“The Mourinho’s and even Van Gaal’s, somebody you’d listen to, you don’t listen to Ole and nobody listens to Brendan Rodgers either.

“Brendan Rodgers doesn’t have the character to be a leader at Manchester United.”

He added: “You are going for the same thing as the guy you are getting rid of.

“Brendan Rodgers at Liverpool had a worse record than Ole [at Manchester United]. Under Rodgers, they were seventh or sixth, second and then sixth.

“We have sat here and criticised Ole from the minute he walked into the door because he loses big games, loses finals, he can’t win any trophies but how many trophies did Brendan win at Liverpool in three years? Zero.”

It will be hard for Solskjaer to bounce back from defeats against Liverpool, Leicester City and Aston Villa but the Norwegian has the tools to do it. He must get results away to Atalanta and at home against Man City in the coming days.

These links may surprise a few, though, given how questionable Leicester have been under Rodgers this season. I don’t think his job at the King Power Stadium should be questioned in any way, but coming to Old Trafford is too big a step right now.

Many pundits will argue Solskjaer is also out of his depth, but he’s taking us this far and has been given a few games to salvage his job. At least it’s his to lose.

When it comes to Rodgers, I think he did an OK job at Liverpool but nowhere near enough to land him the big seat in the Old Trafford.

At Celtic he went away to win trophies and you would have to say he has done a very good job with the Foxes in the Premier League — topping it off with the FA Cup last season.

Let us know your thoughts on Rodgers in the comment section.