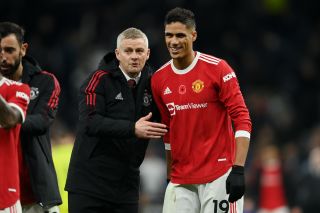 Manchester United needed Raphael Varane’s return from injury for Tottenham. There can be no question over that.

Raphael Varane had missed United’s last three matches with an injury he picked up with representing France in the UEFA Nations League but the centre-back was available for selection again.

And if you’ve read the newspapers this morning it will be all about Cristiano Ronaldo and Edinson Cavani’s link up play, although we strongly believe Varane was the standout performer on the day.

United looked more solid at the back because we had someone in defence keeping shape and telling players where they needed to be. Harry Maguire doesn’t do that and hardly acknowledges his own mistakes.

Varane took to Twitter after the game to share his thoughts on the win (thankfully it wasn’t an apology like other players opt for after bad results).

Clean sheet, three goals, three points. This is the response we wanted to show ! pic.twitter.com/ZOaIZiEqr9

It was something special watching him operate in defence and hopefully his return can help bring us more clean sheets.

United fans heaped praise on the 28-year-old on Twitter at full-time:

Raphaël Varane made more clearances than any other player on the pitch vs. Spurs [6].

Great to have him back. 🪨 pic.twitter.com/6jCAzW1YX3

What a calming influence Varane has. World class. We cannot let him get injured. Without him, we look shite.#MUFC

Yesterday was a 𝐦𝐚𝐬𝐭𝐞𝐫𝐜𝐥𝐚𝐬𝐬 from Varane.

He separately gave out shit to Maguire and Lindelof on more than a couple occasions – for a long time this defence has needed a leader and an organiser.

Not a bad days work from someone getting used to the team & off an injury pic.twitter.com/7C2i44tWqm

Raphael Varane was superb tonight. It was great to have him back and to get a well needed clean sheet 🇫🇷 pic.twitter.com/20JX8CVbBR