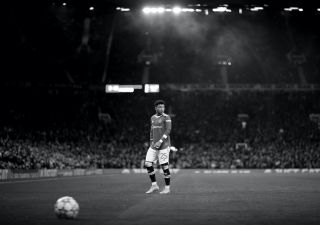 Problems still exist at Manchester United despite yesterday’s convincing win away against Tottenham Hotspur. It was a much needed result because Ole Gunnar Solskjaer’s position feels like it’s on the brink. He now two games to salvage his job.

It said a lot about Solskjaer that he changed the team’s formation to a 3-5-2 against Spurs. Not because they have been awful under Nuno Espirito Santo this season, yet sit two points adrift of United, but because of the circumstances he finds himself in.

The Norwegian desperately needs results and was forced to tweak things with his line-up on Sunday — all because he didn’t get a tune out of his players in the biggest game of the season (or for the majority of the early stages of the campaign). I said it last week but losing 5-0 to Scousers at home is inexcusable.

For everyone responsible that was connected to Manchester United.

Of course, there are a few who didn’t get on the pitch. And others who rarely get a run out.

A new system would usually bring hope to their careers, especially if they have reason to believe they were being overlooked in the previous formation, but Gary Neville doesn’t think playing 3-5-2 will help ease the problems that exist with Donny van de Beek or Jadon Sancho.

Recent multi-million investments that are not playing enough football or making the impact they promised.

Take Sancho’s July move for example, costing £73 million (via BBC Sport), and he’s hardly been given a shot at recording his first goal or assist for the club.

Neville likened his situation to Van de Beek, who has also failed to find a regular place in Solskjaer’s line-up, with the 24-year-old midfield linked with a move away in the summer.

“I can’t help thinking about Van de Beek, who’s put the name on him? Who’s sponsoring that at Manchester United? That 40 million quid that’s been spent on that kid who is sat in the stand and not kicked a football now for nearly 18 months. Sancho if he’s not careful, he’s going to end up exactly the same,” Neville is quoted by the Manchester Evening News.

Neville dived in further on Sancho in his post-match analysis, saying: “He’s played in a far better football team at Dortmund, he’s probably come in here and thought: ‘What the hell am I in here, what is this?’ There’s no organisation, no structure, the defensive work rate is poor.

“He’s actually the only player when you look at the defensive running stats at Manchester United’s front players that’s anywhere near – I think he’s five or six out of the top four clubs front players, he was in the top 10 – so he’s had to put a shift in.

I think United were better defensively on Saturday because we were much better defensively and compact when we needed to be, but ultimately it needs to be bettered again. Being organised only gets you so far against Man City, with last week’s 5-0 defeat against Liverpool is still strong in the memory.

Can Sancho turn it around with performances and training better?