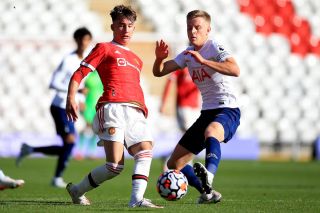 Slovakian youngster Martin Svidersky could be seeking a future away from Manchester United, particularly in hope of pursuing first team football.

Stretty News understands the U23s player has rejected a contract renewal offer from the club and he’s in the last year of his current deal.

Sources close to the situation have told us that four clubs across Europe have already shown significant interest in his signature, including: Atalanta, Frankfurt, Napoli and Hoffenheim.

Been told U23s player Martin Svidersky has rejected a contact renewal offer from #MUFC (he's in the last year of his current deal).

Primarily a winger, Svidersky has played centrally for the U23s this season in the absence of experienced duo Dylan Levitt and James Garner, who both left United on loan before 2021/22 campaign began.

He can be forgiven for turning down a contract renewal offer at 19 because he needs to make this decision wisely.

Does Svidersky want to sit on the bench and wait for his time to come in the first team (when that’s never a given) or will he pursue first team football elsewhere? Some players are better moved on.

It sounds like Svidersky’s mind is made up, too.