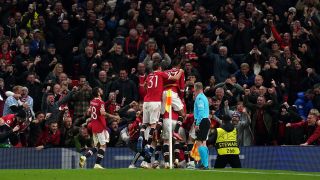 Information that can in no way be deemed positive or helpful has been released ahead of Manchester United’s trip to Atalanta in the Champions League.

Not only are United fans only getting back into the swing of things with away trips across Europe, but local authorities in Bergamo are worried about their presence and have put a ban on the sale of alcohol.

This means the sale of alcohol above 5 per cent will be banned from Tuesday morning to Wednesday morning in bars, restaurants and shops in the centre of Bergamo Alta to surrounding areas to the stadium, as per Football Italia.

Fans are set to fly into Italy ahead of Tuesday’s big game at the Gewiss Stadium, after the Serie A outfit lost 3-2 at Old Trafford in the reverse fixture.

You won’t be able to buy drinks from class bottles, not even non-alcoholic ones.

People have paid their heard earned money to get to see the game in Atalanta, and they should be treated like ordinary tourists at the very least.

This only makes a scene.

Atalanta drew 2-2 at the weekend against Lazio but are well-positioned in the Italian first division, sat fifth after 11 games played.

But, hey, what a way to welcome fans to your city nonetheless.