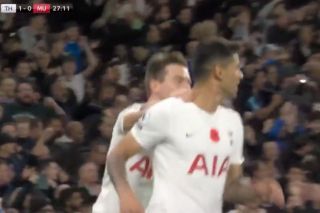 Cristian Romero thought he gave Tottenham the lead against Manchester United but thankfully the goal was ruled for offside.

Assistant referee Simon Long took an age to make his call, and everyone in the stadium looked towards him as the ball went past David de Gea, but flag stayed down.

As you will hear from the commentary in the clip below, the assistant’s final decision came very late. The away end erupted when the call was disallowed.

That’s when Gary Neville jumped in with a brilliant piece of commentary, in reference to assistant referee Simon Long.

🚩 Cristian Romero puts the ball in the back of the net for Spurs but it's ruled for offside by assistant Simon Long @GNev2 🗣 "Long by name, long by nature." 🤣

You can see from the video above that Romero was clearly in an offside position.

But it wouldn’t be the first time VAR got a decision wrong if the goal stood in the first place.

Ultimately, United have been too afraid to concede first in order to score first.