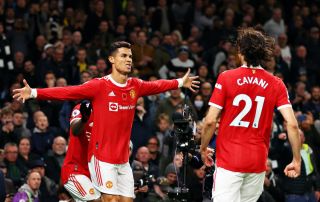 There’s no denying Ole Gunnar Solskjaer felt the pressure all week as speculation grew over his future as Manchester United manager. The understanding is that he had three games – after the humiliation against Liverpool – to save his job.

Manchester United travelled to Tottenham Hotspur today looking to give their fans a reaction and they gave one, winning 3-0 and keeping a rare clean sheet in the process.

Solskjaer changed things around with the formation – adding a third centre-back as well as playing Luke Shaw and Aaron Wan-Bissaka as wing-backs.

Another big change for United was a pleasant one – seeing Edinson Cavani and Cristiano Ronaldo up front together. The stuff of dreams and they combined perfectly.

Solskjaer described the performance as “excellent”, although I wouldn’t go that far. We certainly looked more organized and compact, with Spurs finding it difficult to break us down.

He told Sky Sports (see video below): “The old men led from the front,” with Ronaldo and Cavani both getting on the scoresheet against Spurs.

"The old men led from the front."

Not to forget Marcus Rashford’s sublime winner off the bench to make it three goals in four games since returning from his injury.

The manager also commented on Cavani’s efforts in training on Tuesday, saying it was the best he’s seen since becoming United manager.