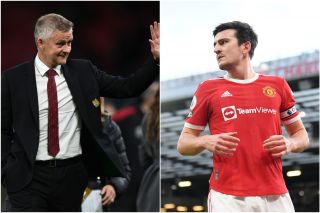 Manchester United’s embarrassing defeat to Liverpool last week has caused quite the inquest, and rightly so. Ole Gunnar Solskjaer’s side were humiliated by their bitter rivals at Old Trafford as they conceded five goals.

Furthermore, the juvenile attitude of some players shone through as Paul Pogba was given his marching orders just 15 minutes after being introduced as a substitute.

Harry Maguire and Luke Shaw both endured their most troubling displays of the season, with the pair struggling for form after their impressive campaign at Euro 2020 together.

Maguire, the captain, has now insisted the squad let Solskjaer down with their performance against Jurgen Klopp’s side and has vowed to make it right.

“It’s been tough, it’s been disappointing,” Maguire told Sky Sports. “When you look back at the result and the performance it was embarrassing. Nowhere near good enough for this club.

“It’s been a tough week. I’m not going to say we’ve moved on easily. It’s one of the lowest I’m sure all the players have felt in their career. You go home and you don’t sleep much, you’ve got thoughts running through your head. ‘If only I did this or this’. If I’m being honest I went home and I just looked at myself and what I can do better and take full responsibility on my shoulders.

“I hope every player in the dressing room is looking at themselves, taking full responsibility on their shoulders and not pointing the finger and blaming anyone else. You look at yourself first and foremost when you have a result like this and a period like this.

“We let the manager down against Liverpool. We let the fans down, the club down, us as players. So we have to take huge responsibility for that.

“Do we owe him a performance? Of course we do.”