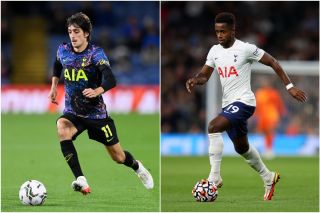 Manchester United have a chance to redeem themselves this weekend as they make the short trip to the Tottenham Hotspur Stadium, a ground they are unbeaten in since it opened in 2019.

Ole Gunnar Solskjaer is under increasing pressure at the club, with the latest defeat to Liverpool causing some supporters to turn on the Norwegian boss.

United’s four-game winless run in the Premier League is, however, unflattering. The game against Tottenham will be huge for Solskjaer and he has been given a slight boost as two Tottenham players are doubts to feature in the game.

Bryan Gil, the former Sevilla winger, will be assessed ahead of the game, a report from the official Tottenham Hotspur website has confirmed. Ryan Sessegnon will miss the game.

Victory over Nuno Espirito Santo’s side would see Solskjaer put a stop to the current rotten run but should they resurrect their title ambitions, a sustained run of victories is required.

Ahead of the encounter, Solskjaer welcomed back French duo Raphael Varane and Anthony Martial to training. The pair have missed United’s last three games.