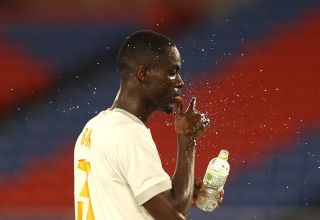 Manchester United defender Eric Bailly is not looking to leave the club in January, according to reports. The Ivorian signed an extension to his contract earlier this year, putting an end to speculation he was set to leave over the summer.

Instead, he ended up staying at Old Trafford but had his pre-season disrupted for the third consecutive year due to injury or other commitments.

Bailly took part in this summer’s Tokyo Olympics with Ivory Coast, which caused him to miss United’s pre-season and subsequently, their start to the season.

The 27-year-old has mustered up zero minutes in the Premier League and Champions League this season, with his only appearance coming in the EFL Cup against West Ham.

Despite continuously being overlooked by Solskjaer, he is not looking to leave the club in the upcoming window, according to CaughtOffside.

Bailly is said to have acknowledged Solskjaer’s tricky position at the club and eyes the chance to potentially impress a new manager. An exit next summer is suggested to be a far more realistic prospect.