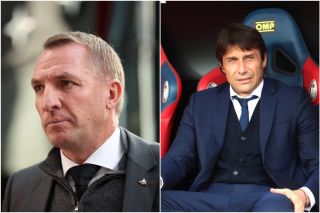 The last couple of results have piled the pressure on Ole Gunnar Solskjaer, who is being questioned amid an embarrassing run of form, which has left his side with only 14 points after nine games.

The latest defeat, a 5-0 thumping at the hands of bitter rivals Liverpool, extended United’s winless run in the Premier League and they are now without victory domestically since beating West Ham in September – a five-game run in all domestic competitions.

Former Chelsea manager Antonio Conte, who is out of work after leaving Inter Milan over the summer, has been linked as Solskjaer’s potential successor but fresh reports claim the Old Trafford club are eyeing up former Liverpool manager Brendan Rodgers.

That’s according to ESPN, who say that the Leicester manager is preferred to Conte by the United hierarchy. Manchester United are said to be planning for life after Solskjaer, despite granting him a stay of execution.

This weekend’s clash at Tottenham will be vital to decide Solskjaer’s future, with the Norwegian very much in danger of losing his dream job.