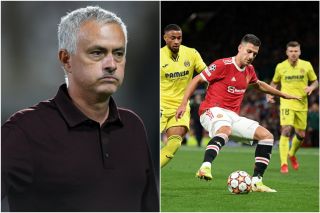 Roma manager Jose Mourinho has set his sights on Manchester United defender Diogo Dalot, according to reports. The former Old Trafford boss already has two former Reds in his squad, with both Chris Smalling and Henrikh Mkhitaryan both plying their trade in Rome.

Aaron Wan-Bissaka is currently Ole Gunnar Solskjaer’s first-choice right-back and the Portugal international has been limited to starts in cup competitions, despite making a rare substitute appearance against Liverpool last weekend.

Mourinho signed Dalot from Porto in 2018 and could now be set for a reunion, with the former Chelsea and Real Madrid manager asking his club to make a move for the defender.

That’s according to Italian outlet Il Romanista, via Sport Witness, who add that Dalot is looking to leave Manchester United in the next transfer window.

It’s claimed that Roma could look to bring Dalot in on loan in January, with a €3m loan fee suggested as compensation for the short-term arrangement.

Dalot has less than two years remaining on his contract at Manchester United and with no extension in sight, a move away from the club could be on the cards.