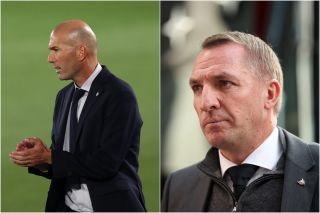 The aftermath of Manchester United’s embarrassing defeat to Liverpool has conjured up a lot of speculation surrounding Ole Gunnar Solskjaer’s future at the club.

The Norwegian boss is under increasing pressure at the Old Trafford club and could face the sack before next weekend’s game against Tottenham Hotspur, who find themselves in a similar position in the Premier League table.

The 5-0 thumping against bitter rivals Liverpool left Solskjaer’s side winless in their last four league games, with the latest victory coming against West Ham in September.

In a report covered earlier on Monday, the club is now seriously considering parting ways with Solskjaer after a run of poor performances and results.

Now, potential candidates to replace Solskjaer are beginning to funnel through social media, with Zinedine Zidane and Brendan Rodgers named as possible successors.

According to Mundo Deportivo, via Sport Witness, Zidane is not currently looking to return to management and has ‘discarded’ the possibility of joining Manchester United. The legendary Frenchman is said to be ‘recharging batteries’ after walking away from Real Madrid in June.

Brendan Rodgers, who has overseen tremendous development at Leicester City since taking charge in 2019, has now also been flagged as an unlikely appointment.

The former Liverpool boss is already in a job, which poses its own challenges. Furthermore, the 48-year-old is not said to be keen on taking up the Old Trafford gig.

That’s according to CaughtOffside, who say that he would be reluctant to take part in discussions to succeed Solskjaer as he would prefer to succeed Pep Guardiola at Manchester City.