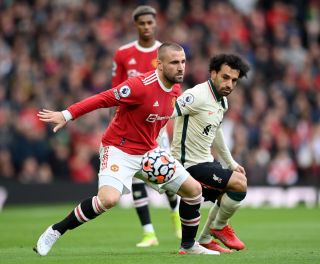 Luke Shaw has accepted his part in Manchester United’s embarrassing defeat to Liverpool on Sunday as the visitors scored five goals on a comfortable evening at Old Trafford.

The 26-year-old defender was one of United’s standout performers over the course of last season but has struggled to hit the same heights this campaign, with the mishap against Liverpool being the latest in a string of poor performances from the England international.

He was, however, far from alone in his performance levels as the entire team combined to mimic a Premier League side ready to challenge for the big honours.

Shaw was quick to make his way to the microphone after the game and gave a damning assessment of his own performance, insisting everyone needs to step up.

“Not good enough. I know of course this is a team sport but as individuals, we need to be accountable for some of the performances,” Shaw told Stadium Astro, via the Daily Mail.

“That’s why I’m out here now, I’m not hiding in there and not speaking, I’ve come out and I will say I was not good enough. I speak on behalf of myself, not the team.

“I am accountable for my performance, it wasn’t good enough. I am not here to speak about the team, we know we can be better but for me I also need to be better than I was today.

“That’s why I have come here, speaking to you, and tell you how it is. It’s ourselves we need to look at first and foremost in the mirror. Are we doing everything right and preparing right for the games in ourselves?

“We have the tactics and how the manager wants us to play. At times, we’re too easy to play through against.

“You look at the first goal, it can’t be possible that they can have three running through in the first five minutes. We need to be more compact, we need to be better.”

With last season’s and this summer’s Euro 2020 performances in mind, Luke Shaw’s own levels this season have been disappointing to say the least.

He will be hoping to rediscover the form which saw him regain his place in England’s first-choice side and Manchester United will need the left-back as they embark on a tricky run of fixtures.