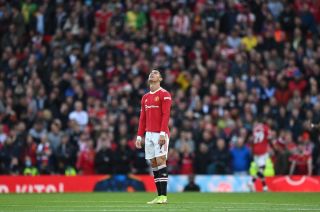 Cristiano Ronaldo has broken his silence after taking part in Sunday’s 5-0 thumping defeat at the hands of bitter rivals Liverpool. The 36-year-old played the entire game and was visibly upset throughout after chasing shadows for 90 minutes.

Chances were few and far in between for Manchester United but Ronaldo still managed to get involved and had a goal disallowed in the second half after a VAR-check.

In the first half, some would argue he was lucky to remain on the pitch after kicking out at Liverpool midfielder Curtis Jones, who had gone down following a challenge from the Portugal international.

“Sometimes the result is not the one we fight for,” Ronaldo said on Instagram after the game.

“Sometimes the score is not the one we want. And this is on us, only on us, because there’s no one else to blame. Our fans were, once again, amazing in their constant support. They deserve better than this, much better, and it’s up to us to deliver. The time is now!”

Ronaldo’s words will do little to console Manchester United supporters, who are now witnessing their beloved side extend their winless run in the Premier League to four games.

The result was particularly damning on Ole Gunnar Solskjaer, whose position at the club is under increasing pressure after a poor start to the season.