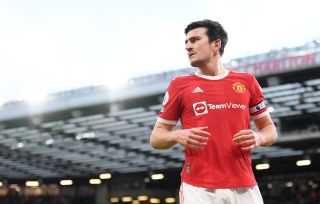 Manchester United’s embarrassing defeat to Liverpool on Sunday has sparked heavy criticism of Ole Gunnar Solskjaer’s side and despite over half of Old Trafford leaving before the full-time whistle, the boos at the end of the game were loud and telling.

It was the worst performance from a Manchester United side in modern history, with last season’s 6-1 defeat to Tottenham not even coming close to this debacle.

Club captain Harry Maguire, who certainly didn’t cover himself in glory throughout the 90 minutes against Liverpool, apologised to supporters after the game, insisting the performance was not good enough.

“First and foremost, apologies to the fans,” Maguire told Sky Sports, via the Mirror. “It’s nowhere near good enough at this club. We are all disappointed. We spoke in the dressing room, I’m here because I have to be here.

“The only real thing is we have to apologise to the fans. They stuck right with us, singing and chanting at 5-0, but for us as a club we have to do better.

“I’m not here to analyse the game. We are so disappointed, we gave them too many chances, they were really clinical.

“Defensively, and I’m a defender first and foremost, conceding four at home at Old Trafford is nowhere near good enough.

“As a player, I know myself, I will be looking at myself as an individual and the performance of the team, I’m the captain and I lead the boys. We have to come together and stick together.”

After a string of poor performances this season, with the latest defeat leaving Solskjaer’s side on a four-game winless run in the league, the latest comments from Maguire will mean nothing to the Old Trafford faithful. The time for talking has passed and only action will suffice.

Manchester United are in danger of completely losing their footing in the league and could find themselves playing catchup to even reach a place in next season’s Champions League, which would be particularly embarrassing after the investments this summer.