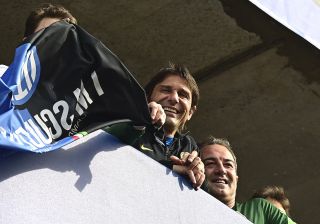 Antonio Conte’s stance on potentially taking the managerial job at Manchester United has been revealed as pressure on Ole Gunnar Solskjaer has intensified following Sunday’s embarrassing defeat at the hands of Liverpool.

Solskjaer’s side were in poor form going into the game and amid a tense situation, Manchester United produced a performance to forget as they conceded five goals and ended the game with 10 men.

The result has left Solskjaer’s job in the balance and despite some of his players coming out and taking the blame, supporters are growing increasingly impatient with their beloved side this season.

Heavy investments were made over the summer, with Jadon Sancho, Raphael Varane, and Cristiano Ronaldo all joining the club in high-profile transfers.

Antonio Conte is out of a job after resigning from Inter Milan following their title-winning campaign and is reportedly open to being Solskjaer’s replacement.

That’s according to the Manchester Evening News, who claim that the Italian manager does, however, have some reservations about taking the job.

As per the report, the former Chelsea manager wants reassurance over Manchester United’s direction and does not want ‘marketable’ players thrown at him.

Conte is, undeniably, one of Europe’s best managers but his profile does not fit what Manchester United need at the moment. For starters, the current squad is not adapted to his rigid system, and more often than not, he prefers to work with short-term goals.

Despite the recent storm surrounding Solskjaer’s position, the Norwegian manager has done well to build a squad capable of challenging now and in the future. Conte would most likely want to tear up the current squad and sign older players, as he did at Inter. That often leaves a team in disarray after the manager’s exit, as it has done at his last two clubs.