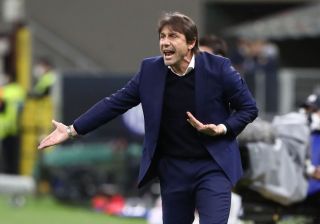 Former Chelsea, Juventus and Inter manager Antonio Conte is eyeing up a return to the Premier League after winning the Serie A with Inter, according to reports.

The Italian has been out of a job since resigning from Inter last summer and is now ‘almost certainly’ going to return into management in the Premier League.

That’s according to a report from CaughtOffside, who claim that any interest from Manchester United will be rivalled by Newcastle, who were recently purchased.

As per the report, Conte is ready to return to management this season, or at the start of next season, with his new job set to be in England.

Pressure on Ole Gunnar Solskjaer is increasing with each passing day and Sunday’s 5-0 defeat at the hands of Liverpool could prove to be the tipping point for the Norwegian boss.

Journalist and transfer specialist Fabrizio Romano gave an update on Solskjaer’s situation, insisting no decision has been taken yet regarding his job.

It remains to be seen whether Solskjaer is under any real threat at Manchester United but there are rumbling of growing disappointment from the Old Trafford hierarchy.

After making large investments over the summer, the club finds itself with just 14 points from their opening nine games of the season.