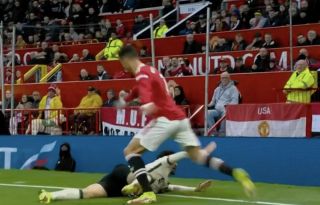 Currently, in action against bitter rivals Liverpool, the Red Devils, playing in front of a packed Old Trafford, have absolutely disappeared.

The game’s first half, which has seen Jurgen Klopp’s Liverpool battered United all over the pitch, currently sees a thumping scoreboard read four goals to nill. Ouch.

The Red Devils have been so poor, in every area of the pitch, that world-class attacker Cristiano Ronaldo has been forced to feed off scraps.

Minutes before the half-time break, the Portuguese megastar was spotted being beaten to a loose ball by Liverpool midfielder Curtis Jones.

Having come away second best, United’s number seven then proceeded to take his frustrations out on the midfielder by kicking out leaving referee Anthony Taylor no choice but to show him a yellow card.