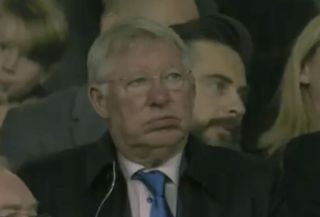 The legendary former Manchester United manager, who is in attendance for today’s Premier League match against Liverpool, has been forced to watch on as his old side get battered by rivals Liverpool.

Jurgen Klopp’s Liverpool has been rampant and despite there still being 30-minutes left to play, the Red Devils find themselves a whopping five goals to nill down.

Picked up on Sky Sports’ cameras, Ferguson was spotted in the crowd clearly dumbfounded by his old side’s horrendous performance.