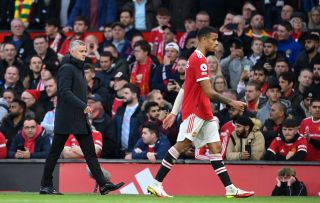 Manchester United have produced one of their most embarrassing performances in Premier League history as Liverpool leave Old Trafford with not only three points but with five goals scored.

Ole Gunnar Solskjaer’s side were turgid, slow, and in truth, simply not good enough as they were outclassed by their bitter rivals.

David de Gea – 6
Really nothing he could do with any of the goals.

Aaron Wan-Bissaka – 3
United’s best defender and he gets a 3/10, what does that tell you about the rest of the team?

Victor Lindelof – 2
Poor performance. Whoever is in charge for United’s next game will be hoping to have Raphael Varane back.

Harry Maguire – 1
Supposedly the captain of his team.

Luke Shaw – 1
His poor start to the season continues – the worst player on the pitch.

Scott McTominay – 2
Even worse than Fred.

Mason Greenwood – 7
Manchester United’s best player on the day and was for some reason substituted at half-time. His side were four goals down but Greenwood posed a bigger goal threat than anyone.

Marcus Rashford – 5
Tried his best but lacked the quality needed.

Substitutes
Paul Pogba – 1
Absolutely disgraceful 15-minute cameo from the Frenchman. Brought on to steady the ship but instead gets himself sent off.