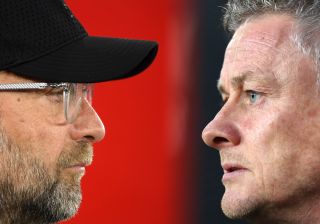 Kick-off between Manchester United and Liverpool is just moments away and the team news has caused quite the stir on social media. The visitors are in flying form ahead of the encounter but Jurgen Klopp’s decision to not play Fabinho or Sadio Mane has sparked optimism from Manchester United fans.

Ole Gunnar Solskjaer wasn’t as controversial in his picks and the Norwegian boss will be happy to welcome Bruno Fernandes back to the side after the Portuguese midfielder was flagged as an early doubt after the 3-2 win over Atalanta earlier this week.

Liverpool will be without midfield general Fabinho, who was key to their 4-2 win at Old Trafford last season. Furthermore, star winger Sadio Mane is also missing – two absences which have left Liverpool fans dreading the worst on social media.

This is how we line up to face @ManUtd. Fabinho misses out with a knock to his knee, which is not thought to be a long-term issue. #MUNLIV

That team is a bit mad. No Mane, Matip or Fabinho! #LFC #MUNLIV

No Mane, Mate or Fabinho… .ok

No Fabinho, Matip or Mane what’s going on? #LFC

I’m gutted there’s no Fabinho, not so Mane or Matip as I think Konate is well suited.

No Matip Fabinho or Mane?? Can't be right 🤦🏾‍♂️

No mane, Fabinho or matip today gonna be a very tough game

Victory for Manchester United would see them end a three-game winless run, having last won a game in the Premier League against West Ham in September.