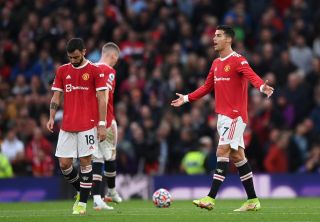 Manchester United are four goals down to their bitter rivals Liverpool at half-time and supporters are not happy as they vent their frustrations on social media.

In truth, Ole Gunnar Solskjaer’s side have produced yet another embarrassing performance as the season enters a stage where it may be too much damage done to recover.

It’s a matter of keeping the numbers down for Manchester United now, with Liverpool showcasing a completely different class in the opening 45 minutes at Old Trafford.

Naby Keita gave Liverpool the lead, Diogo Jota doubled it before two goals from Mohamed Salah ensured a dream first half for the visitors, who could record their biggest away win vs. Manchester United ever.

It's finally resonating with some United fans that the failed ex Cardiff manager Solskjaer is a tactically naive club legend.

The loudest booing of a #mufc performance I've ever heard at Old Trafford.

Huge boos from all round ground as whistle goes.#MUFC

It’s safe to say that supporters were far from happy and they have voiced their frustrations on social media, as seen above.

Solskjaer will find it hard to recover from this damning defeat and with a week to go before they play Tottenham, pressure will mount like never before.