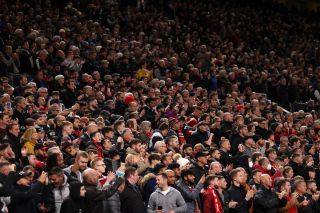 Manchester United’s breathtaking turnaround victory over Atalanta earlier this week has eased the pressure on Ole Gunnar Solskjaer but the Norwegian boss is set to face another stern test on Sunday as he welcomes Liverpool to Old Trafford.

Manchester United’s bitter rivals are in flying form and are full of confidence going into the game, whilst Solskjaer’s side are on a three-game winless run in the Premier League.

Against Atalanta on Wednesday, Manchester United were two goals behind when the whistle went for half-time and that’s where their secret weapon was revealed.

The Old Trafford faithful could have turned on their team after witnessing yet another hapless performance but instead, they backed their side and were unequivocal in their support of their manager. The tireless singing spurred the team on eventually, the two-goal deficit was overturned as United produced one of their memorable nights under the floodlights on Sir Matt Busby Way.

Read more: (Video) Ole Gunnar Solskjaer admits Liverpool are on “a great run of form” ahead of clash

After the game, a large section of supporters stayed behind long after the game had finished to showcase their support of underfire manager Solskjaer. The atmosphere was electric against Atalanta and was truly the 12th man.

That weapon, which is often understated in the current days of online trivialism, will need to be brought out again on Sunday against high-flying Liverpool. Jurgen Klopp’s side is currently sitting second in the standings but the German has only managed one win at Old Trafford since he took over from Brendan Rodgers six years ago.

Manchester United have the chance to build on that euphoric victory over Atalanta and the fans have an opportunity to help their team once again, and they’re going to need it.