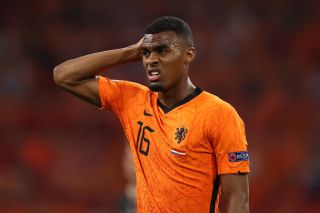 Manchester United are set to challenge bitter rivals Liverpool in their pursuit of Ajax star Ryan Gravenberch, according to reports. The young midfielder is a mainstay in the Amsterdam side but is the subject of strong interest from the Premier League.

Heavy investments were made by Manchester United over the summer, with the arrivals of Jadon Sancho, Raphael Varane, and Cristiano Ronaldo taking the club’s spending well past the £100m mark.

A midfielder was not signed, however, and that is believed to be Ole Gunnar Solskjaer’s priority for next summer’s transfer window.

According to The Mirror, the Old Trafford club will now rival Liverpool for Gravenberch but face the obstacle of dealing with agent Mino Raiola, who also represents Paul Pogba.

Read more: “Are you not ashamed?” – Ronaldo was furious with Man Utd team-mates vs. Atalanta

United have had their issues with Raiola in the past, with the Italian intermediary coming to blows with Solskjaer last year over Pogba’s future.

Gravenberch boasts an impressive record at just 19 years old and with one year remaining on his current deal at Ajax when the season ends, a move could come on the cheaper side.

Declan Rice has been linked with a move to Manchester United but the players have different profiles, with Gravenberch thriving in a box-to-box role.

The Raiola factor could prove to be an obstacle too high to climb for the club. Dealings with Raiola have proved to be very difficult in the past.