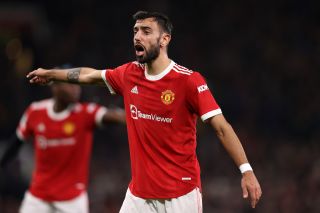 Manchester United will return to Premier League action on Sunday as they welcome Liverpool to Old Trafford. Jurgen Klopp’s are second in the Premier League and will be full of confidence ahead of the encounter.

Wednesday’s Champions League game against Atalanta saw Ole Gunnar Solskjaer’s side produce one of their most memorable outings in the tournament, with Cristiano Ronaldo’s late header completing a sensational turnaround after being two goals behind at half-time.

Bruno Fernandes, who was awarded ‘Man of the Match’ for his display against Atalanta, is now an injury doubt for the game against Liverpool, manager Solskjaer has confirmed.

“Games like Wednesday will always bring knocks and bruises,” Solskjaer told the official Manchester United website. “We have two or three with knocks but I hope I can pick from a fit squad. Bruno might be a doubt but he’s doing everything he can to be fit.”

Furthermore, midfielder Fred was also confirmed to be a doubt for the game after being substituted late on against Atalanta with what looked like a hamstring injury.

“I can’t say if Fred will be fit or not. We might have the whole squad fit but may miss two or three. We’ll see,” the Norwegian manager confirmed.

Potentially losing a player of Fernandes’ quality would be a huge blow to Solskjaer, especially considering his influence on the team. Fernandes remains United’s talisman in midfield and despite playing deeper than most of the attackers, he is often the difference-maker for his side.

The 27-year-old is joint-top in the Champions League assist charts and scored in United’s last home game against Liverpool. In his absence, Paul Pogba could be asked to play a more central role.