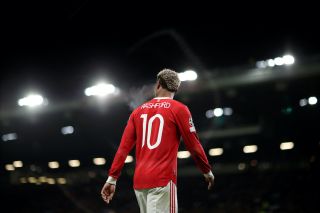 This Sunday, October 24 sees the first meeting of the season between bitter rivals Manchester United and Liverpool.

Following Wednesday’s sensational comeback in the Champions League in the Reds’ first meeting with Italian side Atalanta, it leaves the question of who will grace the starting 11 and who will take a stunt on the bench.

The game saw Marcus Rashford’s return to Old Trafford and club football since his appearance in the Europa League final last May, and the star was adamant to make his mark. After his goal to kickstart the comeback and a promising performance, our number. 10 was forced to leave the pitch with a dead leg in the 66th minute – leaving his involvement in Sunday’s game in question.

When pressed on the matter of Rashford’s fitness, Solskjaer responded (via Manchester Evening News): “It was a dead leg and sometimes it can take longer than you want. But if we treat it well, he should be okay.”

Ole also opted to bench Pogba and Cavani for the first hour of the game, who undoubtedly changed the tempo of the match with the Uruguayan’s forceful pressing and the Frenchman’s contributions to the attacking build-up play, which will have left the manager with much to contemplate as we approach the highly anticipated clash.

As for the opposition, who managed to grind out a 3-2 win in Madrid on Tuesday, will likely start the fixture with a similar lineup to the win. Mo Salah continued his goalscoring form by adding two goals to his season tally on the night, and even set a new record for the club of being the first to score in nine consecutive games, a stat that could cause concern around Old Trafford.

Roberto Firmino is also likely to stay in favour, over the likes of Diogo Jota, after scoring a hat-trick last time out in the Premier League against Watford.

A talking point that has followed United’s stunning victory last night, is the backing of the supporters in the stadium. Commentators, players and even our manager commented on the remarkable noise made by the home fans, and even put the team’s success down to our phenomenal support.

Fellow match-going reds, heading into this weekend’s clash, it’s more important than ever to create the same atmosphere – and back the boys and the manager 100%.