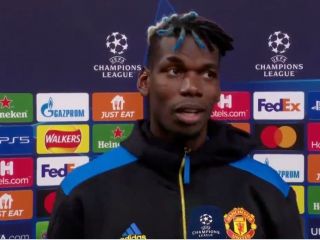 Paul Pogba gave an interview to Andy Mitten after Manchester United’s 3-2 win over Atalanta on Wednesday night and spoke about his teammates after moving top of Group F in the Champions League.

The Manchester United fanzine editor was covering the game for Sony Sports India and managed to catch an interview with the Frenchman, who came on as a second half substitute against Atalanta as United turned the game on its head.

Pogba spoke highly of his teammates — Harry Maguire, Marcus Rashford and Cristiano Ronaldo — all players that got their names on the scoresheet for the memorable comeback.

Ronaldo got special praise for his impact on the team after scoring the all important winning goal.

Pogba said: “Cristiano is Cristiano. It is the Cristiano thing that he did today.”

Pogba, "Cristiano is Cristiano, he did the Cristiano thing today" after a rousing win, @PaulPogba lauds @Cristiano's midas touch and is confident of @ManUtd turning around the season speaking to @AndyMitten pic.twitter.com/nPguTeX5SX

Mitten also asked Pogba if he was happy at United because he had a smile across his face, but the midfielder played down a chance to commit his future to the club, at least in the public eye, by saying he always smiles.