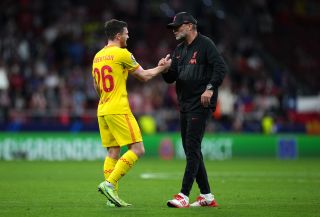 Manchester United have been in patchy form this season, sitting sixth in the Premier League after 8 games.

The Reds waved goodbye to our 30 game unbeaten run away from home at the King Power Stadium last weekend, losing 4-2 against Leicester City.

Having said that, I hope the lads can raise their game for the next test, as Liverpool come to Old Trafford on Sunday.

Looking ahead to the meeting between two arch rivals, Empire of the Kop writer, Farrell Keeling, joins us to give his thoughts on Liverpool, FSG and the upcoming clash.

Catch our Q&A over on EOTK on all things United!

Dale: Jurgen Klopp lost his first three finals – Europa League, Carabao Cup and the Champions League – before he won anything as Liverpool manager. Ole finds himself in a similar situation, but many fans are calling for his head across social media. Did Klopp have a job keeping fans on side in the early days of his reign?

Farrell: “Bizarrely, it was a simultaneously dark but joyous period in our recent history.

“Having come achingly close to the league title in 2013/14, I think it’s fair to say the fans were desperate to see our fortunes turn.

“You have to remember Klopp got Liverpool to the Europa League and League Cup finals on sheer force of will alone. Barring a few gems, the team was far from being the world-beater that it is today.

“Whilst it was disappointing to come close to silverware once again early in the German’s regime, I don’t remember fans being quick to judge or doubt him. There was an air of general pessimism that had lingered from Rodgers’ tenure but I think by that point fans were just fed up of coming close but not close enough to success.

“We always knew to a certain degree what we were getting with Jurgen, however. We were all aware of his achievements in Germany, coming up against a veritable superpower in Bayern Munich.

“The early signs on the pitch, too, were encouraging. The early, unrefined days of gegenpressing were chaotic but attractive – we could see how the style of football he wanted to impose could eventually help us challenge our domestic rivals.

“That’s not to say there weren’t the odd few naysayers on Twitter, as there always are, but I think, for the most part, the fanbase quickly fell in love with Klopp and bought into his vision.”

Dale: We have long written about bad owners like the Glazers at Stretty News, but how do you feel about FSG, who run Liverpool but haven’t backed Klopp since winning the Premier League like other clubs would?

Farrell: “It depends on how you define ‘backing’.

“If you compare just the last summer window alone, FSG haven’t financially backed Liverpool as well as the Glazers have.

“Yet, as things currently stand, we find ourselves second in the league table and only a point adrift of Chelsea.

“Many will point out, of course, that we have a world-class manager – potentially the globe’s leading coach (or at the very least in the top two) – who has worked miracles alongside a recruitment team that boasts our eagle-eyed sporting director, Michael Edwards.

“Make no mistake, FSG are not without their flaws – and such flaws are not few in number.
From furloughing staff during the COVID-19 pandemic to pushing for Liverpool to join the European Super League, our American owners have made decisions that are diametrically opposed to the socialist roots of the club. As such, John W. Henry and co. have rightly lost a great deal of the goodwill they’ve amassed getting the club into this fantastic position.

“We’d be remiss, of course, to completely overlook all the good things they’ve done to enable us to be both a league and Champions League-winner in the last few years.

“The problem is that we always end up with the same inevitable question when we consider whether or not FSG qualify as good owners: who else would be better suited?
Seriously – think about it!

“I’m sure you can find plenty of groups from the Middle East who would bite your hand off to control a club with the prestige of Liverpool and, indeed, we’ve had interest from that part of the globe before.

“But would a group like the Saudi-backed consortium who took over Newcastle United necessarily be a better fit? Would they share our values better than FSG?

“Sure, we’d probably have our transfer dreams fulfilled every summer. But is that worth it at the moral price we’d be forced to pay, sucking up to owners from nations with well-documented human rights abuses?

“There’s no such thing as a purely ethical billionaire, but I’d happily take owners like FSG over investment from an individual who, as the allegations suggest, ordered the murder of a journalist who criticised his regime.”

Dale: Do you have fears about the running of Liverpool when Klopp decides to move on from Anfield?

Farrell: “Yes and no.

“That sounds like an absolute cop-out of an answer but I have my reasons for it!

“Any team in world football (regardless of the financial backing at their disposal) would feel the loss of a manager like Jurgen Klopp.

“These could be a difficult few years leading up to the expiry of the former Borussia Dortmund boss’ contract in 2024 given that Michael Edwards’ contract is set to expire next summer.

“I don’t envy the task of potentially replacing our talismanic manager that will fall on the shoulders of our sporting director’s likely replacement, Julian Ward – nor the challenge of filling his predecessor’s shoes.

“That being said, Liverpool is not a club of individuals – a point Klopp has repeatedly hammered home.

“It has relied on brilliance from across the club and we’ve got some extremely talented individuals from recruitment to the coaching staff who will (hopefully) remain in Merseyside to work alongside a new head coach.

“I think the running of the club – beyond FSG’s aforementioned blunders – has generally been pretty solid and I expect that to continue with or without Klopp.

“I’m more concerned about whether the right individual will be available at the right time.
Of course, there’s also the possibility to contend with that Klopp could be persuaded to either extend his stay or return after a break.

“If Liverpool are smart about things, they’ll at the very least float the idea the German’s way.

“A year’s sabbatical – with Pep Lijnders as a potential stop-gap solution – with a view to welcoming Jurgen back with open arms for a second spell at Anfield would be a dream solution.

“I’m not banking on it happening but it’s a possibility that the club could and should explore.”

Dale: Nobody was talking about Liverpool being title contenders at the start of the season. Do you think that has helped the team to get back on track after the problems it faced last term?

Farrell: “Being dismissed as a genuine threat in the title race will have certainly fired up the players if they’ve caught whiff of the comments in question.

“If I were Klopp, I’d have the list of predictions from BBC pundits at the start of the season stapled to a wall in the changing rooms as a constant reminder of just how forgetful most commentators have been following our success in recent years.

“I know it’s something of an ongoing joke that Liverpool aren’t successful as a club because most of our accomplishments came prior to the inception of the Premier League (as if history suddenly ceased to exist). However, I didn’t realise that attitude likewise applied to major trophies the club have won in the last three years; it seems many have forgotten that we were title-winners as recently as the 2019/20 season.

“The drop-off last term wasn’t due to the pressure of being title-holders – our squad was ripped in half and persistently terrorised by the spectre of injuries.
Regardless, we’ve got a mostly full-strength squad this term, which looks more than up for the challenge based on the early evidence.

“Being treated as underdogs, I think, suits us just fine; though, that’s not to say being labelled favourites would have deterred us either.”

Dale: Mohamed Salah is in incredible form. You must feel like you can beat any team at the moment?

Farrell: “There’s no question that he’s enjoying a pretty incredible purple patch at the moment, which is showing no signs of stopping.

“Mohamed Salah has been a gear above his fellow forwards – potentially two, you might argue – which is saying something given the quality we possess up top.

“I find it highly interesting, of course, that it’s taken a couple of world-class goals against Manchester City and Watford for most commentators outside of Merseyside to sit up and take Salah seriously as a truly world-class talent.

“But that’s a side point. For now, whilst our Egyptian King is firing on all cylinders, you get the sense that this Liverpool team is capable of anything this year.

“Jurgen Klopp would be quick to remind us that it’s not just Salah contributing to our positive start to the season, however, and he’d be right to.

“Having Virgil van Dijk back (despite him still arguably not being at 100% in terms of his prior standards) is massive.

“Combine a settled backline with some big performances from our backup midfielders – not to forget our talismanic frontman in Salah – and you’ve got a frightening prospect for any side domestically and beyond.”

Dale: Are you confident ahead of Sunday?

Farrell: “Away at Old Trafford is a bit of a tricky one to predict at the moment, particularly in light of Manchester United’s variable home form.

“Taking into account our recent visits during Ole Gunnar Solskjaer’s tenure, we’ve run off with five points from a possible nine in the last three occasions the club hosted us in the English top-flight – not a bad return!

“We always expect United to raise their game when Liverpool come around, of course, and I doubt that Sunday’s upcoming meeting will be any different.

“Having said that, I’m not sure how excited Solskjaer’s men will be to play this Liverpool side given the form we’re in.

“I think it’ll be a closer affair (at least in the scoreline) than the recent 4-2 spectacle between Leicester and United, but I reckon Liverpool will take the lion’s share of the points… just. I’m going for a 3-2.”